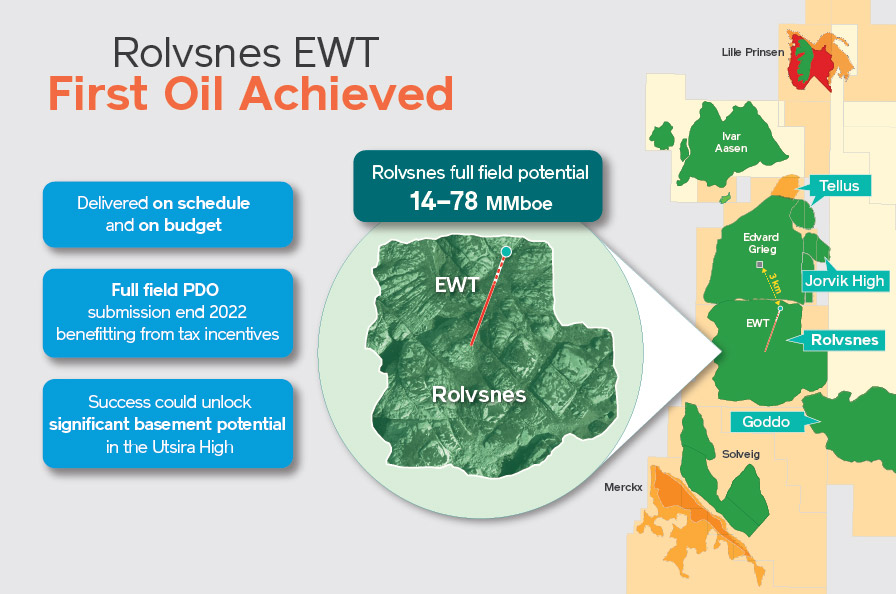 First oil from the Rolvsnes field

The Rolvsnes field is located in PL338C on the southern side of the Edvard Grieg field and is a weathered and fractured granite basement reservoir. During 2018, the successful drilling and testing of a horizontal appraisal well (16/1-28) was completed, which flowed 7,000 bopd, demonstrating good reservoir productivity. The appraisal well has been converted to a development well and tied back the 3 km distance to the Edvard Grieg platform, with the project being completed on schedule and on the budget cost estimate. The resource estimate for the Rolvsnes field is between 14 and 78 million barrels of oil equivalent (MMboe) gross.

The objective of the EWT is to gain a better understanding of the reservoir properties, reservoir connectivity and long term production performance of the field and if successful, this test has the potential to unlock a full field development for Rolvsnes, further extending the plateau production period for Edvard Grieg. Once sufficient data and production experience has been gathered, a Plan for Development and Operation (PDO) could be submitted by the end of 2022, benefitting from the temporary tax regime in Norway. A successful test could also derisk significant additional resource potential in weathered and fractured granite basement reservoirs on the Utsira High.

Lundin Energy Norway AS, a wholly owned subsidiary of Lundin Energy, is the operator of PL338C with an 80 percent working interest, with the remaining interest held by OMV (Norge) AS.

Nick Walker, President and CEO of Lundin Energy, commented:
“One of our strategic priorities is to extend plateau production on Edvard Grieg keeping the facilities full in the long term. We have successfully managed to extend the Edvard Grieg plateau by over 5 years already, through successfully unlocking resources within the Edvard Grieg field and through near field tie-back developments. The Rolvsnes EWT is the first tie-back development into our operated Edvard Grieg hub and production data from the EWT will provide vital information to potentially unlock the full field development of the Rolvsnes field, as well as further weathered and fractured basement reservoir opportunities on the Utsira High.” 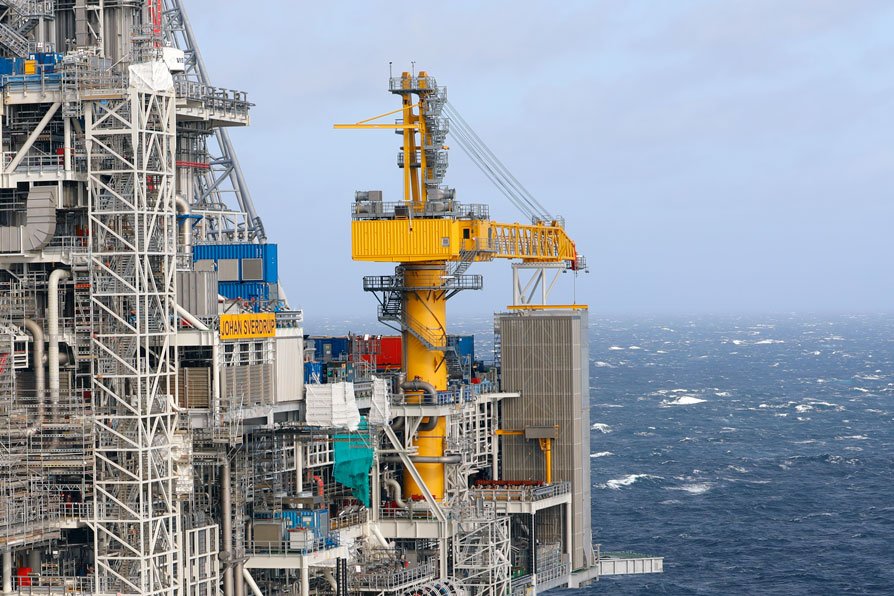 Lundin Energy AB (Lundin Energy) is pleased to announce that following better than expected production performance across all key fields, the production guidance for 2021 has been increased to between 180 to 195 thousand barrels of oil equivalent per day (Mboepd), from the original guidance of 170 to 190 Mboepd.

Production year to date (to end May 2021) has been 185 Mboepd, which is above the mid-point of the original guidance range. This has been driven by excellent production efficiency across all assets, an earlier than forecast increased plateau rate of 535 thousand barrels of oil per day (Mbopd) gross at Johan Sverdrup Phase 1 and additional capacity available at the Edvard Grieg field. The additional facilities capacity at Edvard Grieg has been due to the Ivar Aasen field not utilising their contractual capacity, and it is expected that this will continue for the remainder of the year. 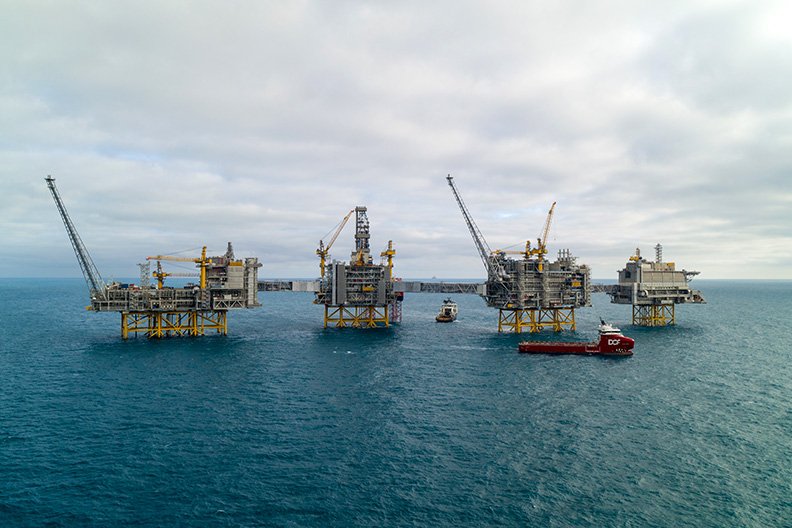 Lundin Petroleum AB (Lundin Petroleum) is pleased to announce first oil from Phase 1 of the Johan Sverdrup field on the Utsira High in the Norwegian North Sea, ahead of schedule and below budget.

The field commenced production on 5 October 2019 and is expected to ramp up quickly as the eight pre-drilled production wells are progressively commissioned. Phase 1 plateau production is expected to be achieved by summer 2020 and will require two to four new wells to be drilled, with the first of these expected to come on stream around the end of 2019.

Phase 1 of the project has been developed as a field centre of four platforms – drilling, processing, living quarters and riser platform. The field has gross recoverable reserves of 2.7 billion barrels of oil equivalent and during Phase 1, Johan Sverdrup will produce 440,000 barrels of oil per day, increasing to 660,000 barrels of oil per day, after Phase 2 of the development commences production in the fourth quarter 2022. At its peak, the field will produce approximately 25 percent of all petroleum production on the Norwegian Continental Shelf.

Johan Sverdrup Phase 1 has been delivered below the original budget, saving to date approximately NOK 40 billion gross at project exchange rates. The field is being operated with power supplied from shore and will be one of the lowest CO2 emitting fields in the world, with CO2 emissions of below 1 kg per barrel, about 25 times less than the world average. Post Phase 1 plateau, operating costs will be below USD 2 per barrel and the full-field break-even oil price, including past investments, is less than USD 20 per barrel.

Equinor AS, is the operator of Johan Sverdrup with a 42.6 percent working interest. The partners are Lundin Norway AS with 20 percent, Petoro AS with 17.36 percent, AkerBP ASA with 11.5733 percent and Total S.A. with 8.44 percent.

“I am very pleased to announce first oil from Johan Sverdrup, which is truly a transformational moment for Lundin Petroleum. Since we made the discovery in 2010, this field has exceeded all expectations in terms of project execution, resources growth and cost reduction and it is a testament to the hard work from all stakeholders and regulatory authorities, to get the field up and running ahead of schedule and below budget. This is one of the largest industrial projects in Europe, and I would like to thank the operator Equinor, who have done a fantastic job in managing the development of this world class field.

“The genesis of Johan Sverdrup is a realisation of how much value can be generated from an organic growth strategy and with this significant moment in the history of the Company, I would also like to pay tribute to the hard work, dedication and inspired ideas from each business area of Lundin Petroleum and specifically the temerity and tenacity of what a technically driven exploration team can achieve, if they are given the right support and backing.”

• Field development project execution – engineering and construction was spread all over the world at 22 main sites.
• Field comprises an area of 200 km2, same size as the City of Stockholm.
• The first phase of the development has taken 70 million man-hours, and more than 12,000 people worldwide have worked every day during the main construction period 2016-2018.
• Total topside weight is ~94,000 tonnes which is comparable with the weight of more than 53,000 Volvo XC60’s.
• Total jacket weight is ~68,000 tonnes which is comparable with the weight of 7 Eiffel towers.
• The field will be operated by power from shore, which will reduce the emissions by more than 620,000 tons CO2 per year, compared to traditional gas turbines offshore, equivalent to more than 310,000 private cars.
• Peak production on Johan Sverdrup will be equivalent to 25% of all Norwegian petroleum production.