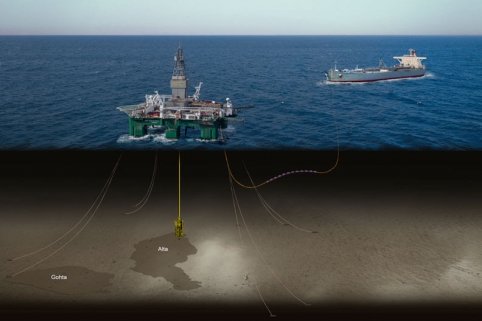 Lundin Petroleum AB (Lundin Petroleum) is pleased to announce that its wholly owned subsidiary Lundin Norway AS (Lundin Norway) has commenced drilling well 7220/11-5 on the Alta discovery in PL609 in the southern Barents Sea. Following drilling, the well will be used for extended well testing.

The Alta discovery is located in PL609 in the southern Barents Sea, approximately 160 km from the Norwegian coastline. The discovery was made in 2014 and three successful appraisal wells have been completed to date. The adjacent Gohta discovery located in PL492 is considered a possible joint development opportunity together with the larger Alta discovery. The combined gross contingent resource range for the Alta and Gohta discoveries is estimated to between 115 and 390 MMboe.

A 700 metres long horizontal well will be drilled in the oil zone, which will improve the lateral geological understanding of the Permian-Triassic karstified and fractured carbonate reservoirs. The main objectives of the extended well test is to prove sustainable production rates and reduce the uncertainty around the recovery mechanism in this reservoir to provide the basis to progress development studies.

The semi-submersible drilling rig Leiv Eiriksson will be used for the drilling and testing at Alta. The well will be tested through the rig for about two months and the produced volumes will be flowed via a flexible flowline to a tanker. At the end of the test, the oil and water produced to the tanker will be delivered to the Mongstad oil terminal on the west coast of Norway. A successful outcome of the extended well test will provide important information to progress further appraisal drilling and field development activities. Drilling and testing is expected to take 140 days.

> News Archive (PDF)
Invitation to the AGM of Lundin Petroleum