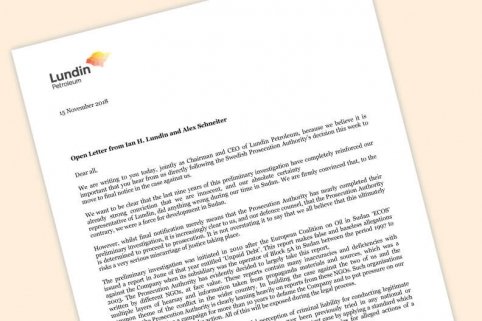 We are writing to you today, jointly as Chairman and CEO of Lundin Petroleum, because we believe it is important that you hear from us directly following the Swedish Prosecution Authority’s decision this week to move to final notice in the case against us.

We want to be clear that the last nine years of this preliminary investigation have completely reinforced our already strong conviction that we are innocent, and our absolute certainty that neither we, nor any representative of Lundin, did anything wrong during our time in Sudan. We are firmly convinced that, to the contrary, we were a force for development in Sudan.

However, whilst final notification merely means that the Prosecution Authority has nearly completed their preliminary investigation, it is increasingly clear to us, and our defence counsel, that the Prosecution Authority is determined to proceed to prosecution. It is not overstating it to say that we all believe that this ultimately risks a very serious miscarriage of justice taking place.

The preliminary investigation was initiated in 2010 after the European Coalition on Oil in Sudan ‘ECOS’ issued a report in June of that year entitled ‘Unpaid Debt’. This report makes false and baseless allegations against the Company when its subsidiary was the operator of Block 5A in Sudan between the period 1997 to 2003. The Prosecution Authority has evidently decided to largely take this report, as well as other reports written by different NGOs, at face value. These reports contain many inaccuracies and deficiencies with multiple layers of hearsay and information taken from propaganda materials and sources, which was a common theme of the conflict in the wider country. In building the case against the two of us and the Company, the Prosecution Authority is clearly leaning heavily on reports from these NGOs. Such organisations have also been leading a campaign for more than 10 years to defame the Company and to put pressure on our institutional shareholders to take action. All of this will be exposed during the legal process.

The suspicions are based on a biased and wrongful perception of criminal liability for conducting legitimate business activities and, as far as we are aware, this has never been previously tried in any national or international court. The Prosecution Authority is looking to establish a test case by applying a standard which extends beyond international law for responsibility of individuals and companies for alleged actions of a sovereign state.

Far from being indifferent to the conflict, which erupted in the region during the period, the Company did everything in its power to promote peace through peaceful means. The peace efforts in Sudan during that time eventually led to the signing of the Comprehensive Peace Agreement in 2005, which in turn led to the creation of South Sudan in 2011. It is important to note that Block 5A is part of what is now South Sudan and the violence that continues there today, involving the same ethnic and tribal conflicts and individuals as during our time in the area, is still unrelated to oil activity. This ongoing conflict is a true tragedy and we sincerely hope that it will soon be resolved and allow the country to be peacefully rebuilt using its own, rich natural resources.

The recent approval by the Swedish Government to allow prosecution to proceed was granted without taking into account the ramification such a case will have on Sweden’s international relations, including with Sudan, in respect of alleged crimes that have never been proven. Sweden had a policy of constructive engagement with Sudan at the time of our activities and encouraged companies to invest whilst taking no action against the country through sanctions or similar penalties. In addition, the Swedish government refused to visit our area when we asked them to, so that they could see at the time how we operated on the ground.

Despite our extensive cooperation with the Prosecution Authority over the years, including attending numerous interviews, voluntarily handing over thousands of pages of our internal documentation and submitting to police searches of our offices, we do not believe that our information, evidence or arguments have been considered objectively. However, we will continue to defend ourselves and the Company vigorously, through the Swedish courts if necessary, and would like to reassure you that it remains our and our defence counsels’ strong opinion that any judicial process will ultimately result in a clear and unambiguous discharge of any and all claims against us.

We thank all of our shareholders, business partners and staff, as well as our families and friends, for their continued support and would like to reassure you that whilst defending our Company, we will continue to ensure that it grows from strength to strength and delivers all of the economic benefits expected from a highly successful company like ours.

Ian H. Lundin
Chairman of the Board