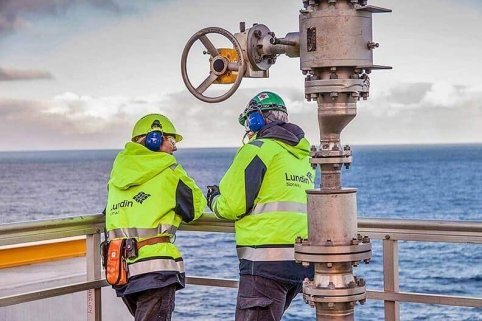 During the fourth quarter of 2016 Lundin Petroleum AB (Lundin Petroleum) achieved a quarterly record average production rate of 83,400 barrels of oil equivalent per day (boepd) resulting in an average production rate for the full year of 72,600 boepd. The average Brent oil price for the fourth quarter of 2016 was USD 49.33 per barrel.

The profitability for the fourth quarter of 2016 will be negatively impacted by certain expensed exploration costs and impairment charges, as well as a foreign currency exchange loss mainly related to the revaluation of loan balances. These items are largely non-cash charges and will have no impact on operating cash flow or EBITDA.

Impairment Costs
Lundin Petroleum has decided to remove from its contingent resources the gas discoveries in the Sabah region offshore East Malaysia and the Tembakau gas discovery in PM307 offshore Peninsular Malaysia as well as the Morskaya oil discovery in the Russian Caspian Sea. Whilst these discoveries will remain in the portfolio of Lundin Petroleum, management considers it unlikely that any of these discoveries can be commercialised within a reasonable timeframe and therefore deems it prudent to no longer carry these resources on its books. The net contingent resource write down in Malaysia amounts to 60.6 million barrels of oil equivalents (MMboe) and the net contingent resource write down in the Morskaya oil discovery amounts to 110.1 MMboe. The updated Lundin Petroleum net contingent resource position as at 31 December 2016, which will be released in a separate press release on 19 January 2017, will therefore exclude the resources associated with these discoveries.

As a consequence of writing down the contingent resources associated with these discoveries, Lundin Petroleum will incur a non-cash impairment charge in the fourth quarter of 2016 of USD 632 million with a corresponding tax credit of USD 83 million resulting in a negative impact on the fourth quarter net results of USD 549 million.

Lundin Petroleum will recognise a net foreign exchange loss of approximately MUSD 216 in its income statement for the fourth quarter of 2016. The Norwegian Krone weakened against the US Dollar by approximately seven percent during the fourth quarter of 2016 and the foreign exchange loss mainly relates to the revaluation of loan balances at the prevailing exchange rates at the balance sheet date.

Mike Nicholson, CFO of Lundin Petroleum comments:
“I am very pleased that Lundin Petroleum begins 2017 in a strong financial position. The combination of a robust production performance, excellent cash flow generation in addition to the solid support we receive from our group of 28 international banks under our USD 5 billion reserve-based lending facility, means that we have the spare liquidity headroom required to fund our ongoing development and appraisal projects as well as an active exploration programme. The foreign exchange and impairment charges do not impact the cash flow generation of the Company given that these are largely non-cash accounting charges.”

This information is information that Lundin Petroleum AB is required to make public pursuant to the EU Market Abuse Regulation. The information was submitted for publication, through the contact persons set out above, at 07.30 CET on 19 January 2017

2017 budget and updated reserves and contingent resources
Scroll to top