An important part of Lundin Energy’s production comes from its key operated Edvard Grieg asset in PL338 on the Utsira High located in the central North Sea. The field i is a key production contributor at a low cash operating cost of around USD 4 per barrel. Increased facilities capacity, high production efficiency and strong reservoir performance are the key drivers behind this excellent performance.

The field was discovered in 2007 with Lundin Energy Norway’s first exploration well and production started in late 2015. The field development consists of a steel jacket platform resting on the seabed with topsides including a process facility module, utility module and living quarters. Edvard Grieg is designed as a field centre and receives oil and gas from neighbouring fields and will have the capacity for future developments in the area. Oil is transported via the Grane pipeline to the Sture terminal in Øygarden in Hordaland, while gas is transported via a separate pipeline system to St. Fergus in Scotland.

The development drilling programme on Edvard Grieg was successfully completed in 2018 with overall results exceeding the pre-drill expectations with respect to reservoir quality and exposure. Combined with a strong reservoir performance, that has seen no material water production to date, these positive results have led to a 62% increase of the best estimate gross ultimate recovery for the Edvard Grieg field since PDO.

In October 2019, the plan for electrification of the Edvard Grieg platform was announced, which is being developed together with the Johan Sverdrup Phase 2 project as part of the Utsira High Area power grid. The project will become operational in 2022 and lead to a significant reduction of CO2 emissions from the field, taking the CO2 emissions for the area to below 1 kg per barrel. Additionally, the project will reduce operating costs, reduce carbon taxes and increase operating efficiency; which will be partially offset by electricity power purchases from the grid, generated mostly from renewable sources. Overall the project will enhance the economic return from the Edvard Grieg Area, while at the same time significantly reducing CO2 emissions.

Lundin Energy Norway is the operator of PL338 with a 65% working interest. The partners are OMV Norge with 20% and Wintershall Dea Norge with 15%. 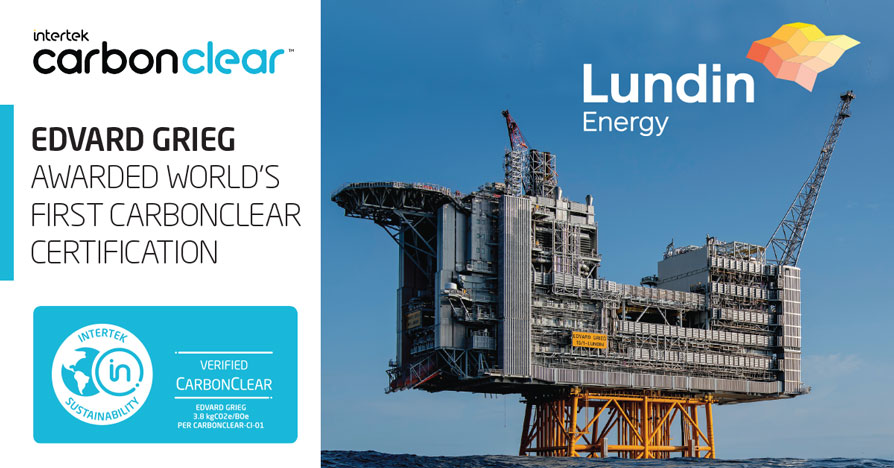 Edvard Grieg is the first field in the world to be awarded the CarbonClear certification, the new independent upstream carbon intensity certification for oil and gas producers. With carbon emissions of 3.8 Kg CO2 per barrel, which is nearly a fifth of the industry average, we further demonstrate our target of becoming carbon neutral across our operations by 2030.