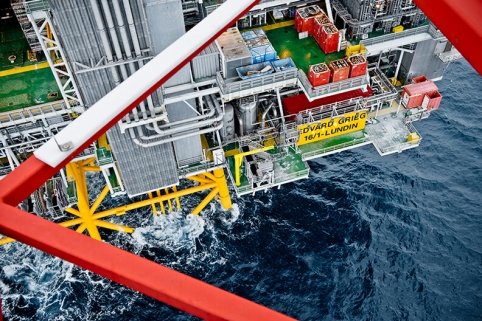 The reserves upgrade on Johan Sverdrup is driven by positive drilling results and promotion of the water alternate gas (WAG) injection project from contingent resources to reserves, which was sanctioned by the partnership during 2018. The upgrade of reserves in the Johan Sverdrup field are consistent with the upgrades announced by the operator Equinor during 2018.

Edvard Grieg production performance continues to exceed expectations with significantly slower build-up of water production than anticipated, leading to around a six months extension of plateau production to mid-2020. As part of the reservoir monitoring programme, a 4D seismic survey over the Edvard Grieg field was acquired during 2018 which confirms that the water injection flood front is further away from the main production wells than predicted by the current reservoir models. This information is still under review and has not been incorporated into the reservoir models used to support the year end 2018 reserves estimate. An infill drilling programme is planned at Edvard Grieg commencing in 2020, and the sanction of this project, which is anticipated during 2019, will allow for the promotion of the associated 10 MMboe net contingent resources to 2P reserves, based on a three well programme.

Lundin Petroleum’s contingent resources as at 31 December 2018 are 225 MMboe, which represents an increase of 40 MMboe from year end 2017, before projects matured to reserves. New discoveries on Frosk in the Alvheim area and Lille Prinsen in the Utsira High area and positive results from the appraisal wells on Luno II, Rolvsnes and Gekko, together with the acquisition of an additional 15 percent interest in Luno II are the main drivers for the increase. The large amount of new information from the positive results from the Alta extended well test (EWT) and latest generation 3D seismic survey (TopSeis) over the entire Alta and Gohta area is still being evaluated. Consequently, contingent resources for the Alta and Gohta discoveries are unchanged from year end 2017 and will be updated during 2019 when the future appraisal plan for the area is defined and all the additional data has been processed.

The reserves estimates have been audited by ERCE, a third party independent reserves auditor, and have been calculated using 2007 Petroleum Resource Management System (SPE PRMS), Guidelines of the Society of Petroleum Engineers (SPE), World Petroleum Congress (WPC), American Association of Petroleum Geologists (AAPG) and Society of Petroleum Evaluation Engineers (SPEE). The contingent resource estimates associated to the Edvard Grieg, Alvheim area, Johan Sverdrup and Luno II assets have been audited by ERCE. For the other assets, the contingent resource volumes are based on management estimates.

Nick Walker, COO of Lundin Petroleum commented:
“In 2018, we increased both reserves and contingent resources, once again highlighting the impact our organic growth strategy has in continuing to deliver the E&P cycle of adding contingent resources and converting it into reserves and then production. This is the fifth consecutive year in which our reserve additions have more than replaced production, whilst in the same period production has significantly increased and as we continue to invest in the portfolio during 2019, I am confident in our ability to continue to grow organically.”

1 Relates to Lundin Petroleum’s portfolio in Norway.
2 BOE’s may be misleading, particularly if used in isolation. A BOE conversion ratio of 6 Mcf : 1 Bbl is based on an energy equivalency conversion method primarily applicable at the burner tip and does not represent the value equivalency at the wellhead.
3 The reserves were calculated using a nominal Brent oil price of USD 66 per barrel in 2019, 70 in 2020, 71 in 2021, 74 in 2022, 75 in 2023, 78 in 2024, 80 in 2025, 81 in 2026, 83 in 2027, 84 in 2028 and increasing by 2 percent per year thereafter.
4 Reserves are measured in salable quantities (saleable oil, natural gas liquids and dry gas converted to oil equivalents), which may differ from production volumes provided in corporate reports which are given in wellhead production quantities (oil and rich gas converted to oil equivalents).
5 As per industry standards the reserves replacement ratio is defined as the ratio of reserves additions to production during the year, excluding sales and acquisitions.

> News Archive (PDF)
Exploration well completed on the Oppdal and Driva prospects in the North S...