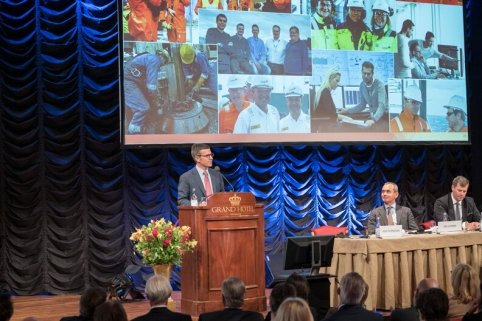 The Annual General Meeting of Shareholders of Lundin Petroleum AB (publ) (the “Company”) was held today Thursday 4 May 2017 in Stockholm.

The Meeting resolved that no dividends should be paid for the financial year 2016.

PricewaterhouseCoopers AB was re-elected as the auditor of the Company for a period until the 2018 Annual General Meeting. The Meeting resolved that auditors’ fees shall be paid upon approval of their invoice.

Further, the Meeting resolved, in accordance with the Board of Directors’ proposals:

–    to approve the Company’s 2017 Policy on Remuneration for Lundin Petroleum’s Group Management, which includes four key elements of remuneration: a) base salary; b) yearly variable salary; c) Long-term Incentive Plan (LTIP); and d) other benefits, and which comprises remuneration paid to members of the Board of Directors for work performed outside the directorship;

–    to approve the LTIP 2017 for members of Group Management and a number of key employees, which gives the participants the possibility to receive shares in Lundin Petroleum subject to uninterrupted employment and to the fulfilment of a performance condition over a three year performance period. The performance condition is based on the share price growth and dividends (“Total Shareholder Return”) of the Lundin Petroleum share compared to the Total Shareholder Return of a peer group of companies. The total number of performance shares under LTIP 2017 as at the date of award may not exceed 465,000 and the maximum cost for granting awards under LTIP 2017, excluding costs related to delivery of the performance shares, is approximately USD 6.9 million (approximately SEK 60.8 million), excluding social security charges;

–    to authorise the Board of Directors to issue new shares and/or convertible debentures corresponding to in total not more than 34,000,000 new shares, with or without the application of the shareholders pre-emption rights, in order to enable the Company to make business acquisitions or other major investments; and

–    to authorize the Board of Directors to decide on repurchases and sales by the Company of its shares on NASDAQ Stockholm, where the number of shares so repurchased shall be limited so that shares held in treasury from time to time do not exceed ten per cent of all outstanding shares of the Company.

The Meeting rejected the shareholder proposal in relation to the Company’s past operations.